People in the South West of England with potential cancer symptoms are being encouraged to come forward for lifesaving checks as part of an NHS campaign.

NHS England chief executive, Amanda Pritchard, launched the campaign to highlight symptoms of abdominal and urological cancers this week, saying that the NHS is open and ready to treat people.

The ‘Help Us, Help You’ campaign from NHS England, with support from Public Health England, uses TV and digital adverts, posters and social media to raise awareness of symptoms of cancers in the abdominal area, urological cancers, and lung cancer.

The ads feature people with a range of symptoms, such as prolonged discomfort in the tummy area or a persistent cough, and aim to persuade people experiencing these to contact their GP.

NHS data shows that more than 16,664 people in the South West are diagnosed with abdominal or urological cancers each year. But, research shows that three in five people (60%) are concerned about burdening the NHS, with half (49%) saying they would delay seeking medical advice compared to before the pandemic[1].

The NHS chief stressed that there could be tens of thousands more people who are not coming forward, either because they’re unaware of common cancer symptoms, or because they feel they would burden the NHS.

Dr Michael Marsh, Medical Director, NHS England and Improvement South West, said:
“We know that thousands of people could be risking their lives by delaying medical attention for cancer symptoms.

“We are open and ready to treat people with potential cancer symptoms. This campaign will remind people of the signs and symptoms to look out for and encourage them to get checked if something isn’t quite right.

“Thanks to the hard work of NHS staff, we are back on track with cancer referrals, diagnosis and treatment so, whether you or a loved one has a routine appointment, or a potential cancer symptom, please don’t delay and come forward to get yourself checked – we would rather see you sooner when any cancer would be easier to treat.

“It’s incredibly important that people recognise the common symptoms that can signal a cancer diagnosis – and it’s vital that they take action by making an appointment with their GP, that could ultimately save their life.”

Despite abdominal and urological cancers accounting for 6,461 cancer deaths in the South West, new figures from the NHS show that many people are unaware of common warning signs – which could prevent them seeking help.

Three in five (63%) people said they didn’t recognise discomfort in the abdominal area for three weeks or more as an indication of cancer.

Alongside abdominal and urological cancers, the campaign will also highlight common signs of lung cancer – after research has found that two in five people don’t recognise that a persistent cough for more than three weeks as a sign of the disease. There is also concern the symptom could easily be confused with Covid-19.

Symptoms that could be possible signs of abdominal or urological cancers include:

People in the South West are being reminded to contact their GP if they have any of these symptoms. People should also speak to their GP if they notice any other unusual changes, such as a lump in the tummy area, post-menopausal bleeding, or unexplained weight loss, as these can also be signs of cancer.

NHS data shows that more than 3,903 people in the South West are diagnosed with lung cancer each year, with the total number of deaths at 2,693. The number of suspected lung cancer patients receiving their first treatment within 31 days has fluctuated over the last two years. There was a similar pattern nationally.

Since May 2020 (with the exception of January 2021), the South West overall has met or exceeded the 93% operational standard for patients seen within two weeks following an urgent GP referral for suspected lung cancer. Performance over the last few months has been similar to the England average.

For lung cancer, symptoms can include:

[1] Respondents were interviewed on the Kantar omnibus 30th June to 2nd July. The omnibus surveys a representative sample of the population aged 16+. The questions were asked in England among a total sample of 2,002. 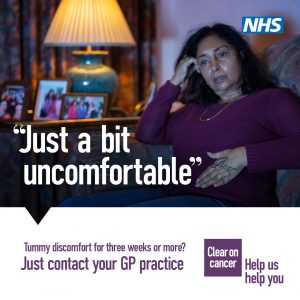